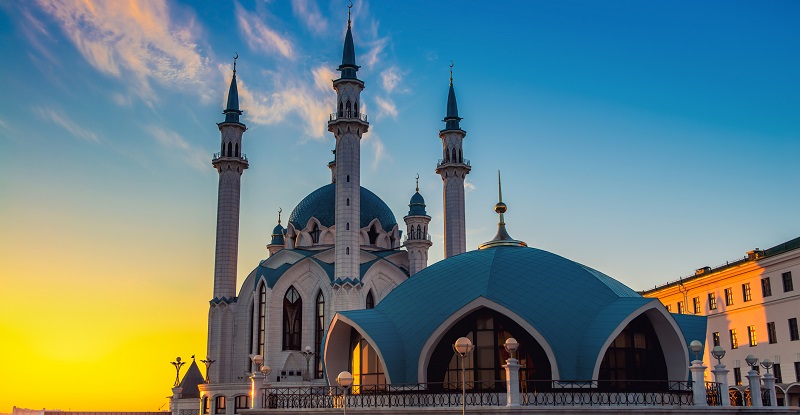 8 a.m. Meeting at the Railway station square (or airport). Time may be changed depending on your arrival. There will be comfortable buses for tourists.

Within the Kremlin complex, you will see the Spassky tower, leaning legendary Syuyumbike tower , burial sites of Kazan khans and residence of the President of Tatarstan,  visit magnificent Kul-Sharif - the most important mosque in Tatarstan and one of the largest mosques in Europe.

The best way to get to know Kazan is through the local cuisine. We offer you to participate in The Secrets of Tatar cuisine master class, where the best chefs will share with you the secrets of cooking famous national dishes such as chak-chak, echpochmak, vak belesh, gubadiya, etc. (Is discussed when you`re booking the tour).

Visit the interactive museum dedicated to traditional Tatar food and taste Tatar desserts such as the traditional chak-chak and baursak, which can only be found in Kazan!

While enjoying your tee and desserts, the guides will share stories and examples about the typical ancient Tatar peoples’ everyday life, their traditions, customs, and of course, the secret to making the perfect chak-chak and other Tatar dishes.

A walking tour passes through one of the oldest and most famous streets of the city - Bauman Street that is the same age as the Kazan Kremlin.

The main pedestrian street of the city, also known as "Kazan Arbat", is filled with fountains that fulfill wishes, the carriage of Catherine II, houses of the 19th century and the monument to Feodor Chaliapin,  Zero meridian of Kazan, showing  the distance to different geographical points of the world, a statue of the Cat of Kazan and others. The street is full of entertainments, museums, boutiques and souvenir shops.

10 a.m. Meeting at the hotel. Leaving the hotel. You can leave your  luggage in the luggage room of the hotel or take it with you.

The island - town of Sviyazhsk is the first Orthodox city in the Volga Region. Surrounded by Russia’s main river — the Volga, it has always attracted historians and travelers. This unique place has hardly changed over the last century- the spirit of the history and life is felt in every monument, street and back alley.

Sviyazhsk was once an ancient fortress, built in Medieval times during the reign of Ivan the Terrible as a military base of the Russian army during the siege of Kazan. After the capture of Kazan, Sviyazhsk continues to live and tell us memories of the its best and most serious times.

The tour route includes a unique historical monuments: the snow-white complex of the UNESCO World Heritage Site - The Sviyazhsk Bogoroditse-Uspensky Monastery with its architectural ensemble of 16th century and unique frescos, St Nicholas Church and the Assumption Cathedral, one of the oldest wooden churches of Russia — the Church of the Holy Trinity, The Museum of Sviyazhsk History , Konniy Dvor ("Horse Yard") and Leniviy Torzhok – a place, where you can experience the true atmosphere of the Middle Ages.

There is an observation platform where you`d be able to enjoy the spectacular view of Sviyaga and Volga rivers.

3 p.m. The Temple of All Religions

We invite you to visit The Temple of All Religions, which combines various styles of buildings of different cultures and religions into one. The colorful temple is believed to be one of the most unusual landmarks of Russia. This is a centre of  spirituality,  a place where bodies and spirits could be cured.

The main idea of the Universal Temple is that all World religions are equal and they all lead to light and peace. This is the only place in the world where the Orthodox and Catholic churches, the Muslim mosque, the Jewish synagogue and the Buddhist temple harmoniously coexist  as one building.

The temple brings together  the iconic elements of 16 World religions, as well as symbols of extinct civilizations. You are invited to visit the rooms of Jesus Christ, Buddha, the Catholic Hall, the Egyptian Hall, the theatre hall and the picture gallery.

8 a.m. Breakfast in the hotel.

9 a.m. Meeting at the hotel. Leaving the hotel. You can leave your  luggage in the luggage room of the hotel or take it with you.

9 a.m.   Bus tour to the ancient city of Bolgar

Visit The Great Bolgar, get acquainted with the civilization of Volga Bolgars  and, of course, enjoy its picturesque ruins and majestic ancient buildings, which attract people from all over the world. Located just 200 kilometres south of Kazan, it’s an official UNESCO World Heritage Site. This place is all that remains of the Golden Horde, the once great and powerful country in Eastern Europe.

Be sure to visit the magnificent White Mosque – a copy of snow-white Grand Mosque of Sheikh Zayed in Abu Dhabi, the Museum of Bolgar Civilization ,the Cathedral Mosque, the Black Chamber, and the East Mausoleum, the 700-year-old burial chamber for Bolgar nobility and Khan’s Tomb.  Also be sure to check out the largest printed Koran in the world, listed in the Guinness Book of Records.

6 p.m. Back to Kazan. Transfer to Railway Station (airport)

Departure time from Kazan is specified in the Request when you are booking the tour.